A French railway engineer in the Ottoman Empire and Yemen

Highly interesting collection of photographs documenting railway construction in Yemen and Turkey as well as an unidentified oriental port city, among other subjects. Paul Gaudin held important positions as a railway engineer and director in the Ottoman Empire between 1892 and 1911, specifically as director of the Moudania-Brousse railway line (1892-94), the Smyrna-Cassaba railway (1894-1905), the Hejaz railway construction project (1905-08), and in the project for the construction of a railway line from Hodeidah to Sana'a (1911). Six photographs can be linked with certainty to the ill-fated Ottoman project in Yemen. Gaudin dated one of these to 23 March 1911, adding the caption: "Hodeidah, 1st section of the Yemen line (view of the construction site)" (transl.). By the end of 1911, the European experts deemed the recently begun project impossible due to a lack of infrastructure (ports and storage), unfavourable climatic conditions that had already reduced much of the delivered iron to scrap metal, and the disastrous Italo-Turkish War (1911-12). This assessment led the French investors to shut down the project and write off their losses in 1912. The photographs show the port of Hodeidah, newly-built tracks, and building materials. A photograph of Port Saïd in Egypt was probably taken on the way to or from Yemen. Three impressive earlier photographs document railroad work on a dam over a lake in Turkey (before 1905).

Paul Gaudin was born in Paris, the son of the chemist Marc-Antoine Gaudin (1804-80). His passion for photography was certainly inherited from his pioneering father who in 1841 introduced the usage of bromine fumes to improve the sensitivity of the plates, allowing for a great reduction of the necessary exposure time, and published the first French journal devoted to photographic research, "La Lumière". In 1880, Paul Gaudin completed his engineering training, obtained a position as deputy stationmaster in Paris, and was subsequently employed as an inspector by the Chemins de fer de l'Ouest. His career took an unexpected turn when he was sent to Turkey in 1892 to direct the Moudania-Brousse railroad line operated by the important Belgian investor and engineer Georges Nagelmackers. As early as 1894, after Nagelmackers had obtained a concession for the Smyrna-Cassaba railway, Gaudin was promoted to director of this important line and led its expansions. Gaudin's lasting contributions to archaeology with his excavations in the bronze-age Yortan necropolis (1898 and 1901) and in the Hellenistic and Roman city of Aphrosidias (1904 and 1905), as well as his important collection of antiquities, date to his time as director of the Smyrna-Cassaba railway. His most prestigious and challenging position as a railroad engineer, however, was his charge by Sultan Abdul Hamid II to complete the famous Hejaz railway. Despite financial problems, difficult geographical and climatic conditions, and the often hostile (sometimes even violent) reaction of the local population, Gaudin led the rapid expansion of the line from Ma'an to Medina, where the construction came to a definite halt in 1908. During this project, Gaudin was the first to photographically document the Arabic old town of Al-'Ula in 1907.

Little is known of Paul Gaudin's employment after his contract with the Hejaz railway expired in 1909, and he seems to have permanently returned to France after the failed project in Yemen. Today, Paul Gaudin is best remembered as a major patron of the Louvre, to which he donated more than 2,000 artifacts from his collection. The Istanbul Museum, the British Museum, and other institutions also owe him important contributions to their Asia Minor, especially Smyrna, antique collections. 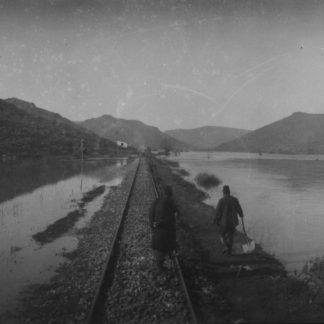