The first photographs from Al-'Ula

The historically significant photographs from Al-'Ula show ancient Dadanitic inscriptions that were used as spolia in local Arabic houses. A particularly interesting photograph portrays two Arab boys at the entrance to a house with an inscription used as lintel. The spolia were gathered from nearby archaeological sites such as the Umm Daraj ("Mother of the Stairs") sanctuary. The inscription in the photograph mentioned was documented and localized in 1909 on a map of the old town of Al-'Ula by the French archaeologists Antonin Jaussen and Raphael Savignac (Jaussen/Savignac 1914, pl. XVIII and pl. LXXXII, no. 49).

The three plates from Hegra document the facade and the interior of one of the famous Nabataean rock tombs. Thus, despite the rough quality of most of the photographs, there is no doubt about their origins from Al-'Ula and Hegra.

The photographs were taken during the construction of the Hejaz railway that was directed by Paul Gaudin between 1905 and 1908. The station in Al-'Ula, some 330 kms north of Medina, was formally inaugurated on 1 September 1907 following an impressively fast building campaign for the ca. 600 km stretch from Ma'an to Al-'Ula which started in 1905. The nearby town of Mada'in Salih, close to the archaeological site of Hegra, was also served by the Hejaz line. Gaudin's photographs can thus be dated to 1906-07; they very likely predate the photographs of the surroundings of Al-'Ula and of the opening ceremony of the railway station taken by the German military advisor and engineer Carl Auler (1854-1930). Auler had been invited by Sultan Abdul Hamid II to join the official delegation for the inauguration of the Al-'Ula station that left Damascus on 27 August 1907, reaching Al-'Ula four days later. An album with the only traceable original prints of Auler's photographs is held at the National Library of Israel (TMA 4153), some of which were published in 1908. In this publication, Auler mentions the common usage of spolia in Al-'Ula, quoting the German oriental scholar Julius Euting: "In the walls and gardens of Al-'Ula many stones with old ornaments and inscriptions can be seen. Concerning their meaning, Euting says the following: all inscriptions that have been found in Al-'Ula were, without exception, not in their original location but were rather used in gardens and houses as building material found in later times" (Auler 1908, p. 50).

A. Jaussen and R. Savignac of the École Biblique in Jerusalem conducted the first archaeological expedition to the area with photographic documentation in the spring of 1907. The expedition reached the Hejaz region in April, setting out for Tayma, Al-'Ula, and Mada'in Salih. However, due to "insurmountable difficulties", they failed to reach Al-'Ula that year, which was only reached during a second expedition in 1909, two years after Gaudin had taken his photographs. While Jaussen's and Savignac's photographs from Hegra might predate Gaudin's, there is no doubt about his pioneering photographic documentation of Al-'Ula. Jaussen's and Savignac's 1909 expedition to Al-'Ula is documented in the second volume of their publication, which appeared in 1914. The atlas accompanying the volume contains several photographs taken in and around Al-'Ula, including the inscription previously documented by Gaudin. Subsequent early photographic documentation of Al-'Ula was created in the course of Leo Frobenius's Seventh German Inner Africa Research Expedition in 1915.

Paul Gaudin was born in Paris, the son of the chemist Marc-Antoine Gaudin (1804-80). His passion for photography was certainly inherited from his pioneering father who in 1841 introduced the usage of bromine fumes to improve the sensitivity of the plates, allowing for a great reduction of the necessary exposure time, and published the first French journal devoted to photographic research, "La Lumière". In 1880 Paul Gaudin completed his engineering training, obtained a position as deputy stationmaster in Paris and was subsequently employed as an inspector by the Chemins de fer de l'Ouest. His career took an unexpected turn when he was sent to Turkey in 1892 to direct the Moudania-Brousse railroad line operated by the important Belgian investor and engineer Georges Nagelmackers. As early as 1894, after Nagelmackers had obtained a concession for the Smyrna-Cassaba railway, Gaudin was promoted to director of this important line and led its expansions. Paul Gaudin's lasting contributions to archaeology with his excavations in the bronze-age Yortan necropolis (1898 and 1901) and in the Hellenistic and Roman city of Aphrosidias (1904 and 1905), as well as his important collection of antiquities, date to his time as director of the Smyrna-Cassaba railway. His most prestigious and challenging position as a railroad engineer, however, was his charge by Sultan Abdul Hamid II to complete the Hejaz railway. Despite financial problems, difficult geographical and climatic conditions, and the often hostile (sometimes indeed violent) reaction of the local population, Gaudin led the rapid expansion of the line from Ma'an to Medina, where the construction came to a definite halt in 1908. Little is known of Paul Gaudin's employment after his contract with the Hejaz railway expired in 1909. He briefly collaborated on the disastrous Ottoman project for the construction of a railway line from Hodeidah to Sana'a in 1911 and thereafter seems to have permanently returned to France, where he died in Versailles in 1921. Today, Paul Gaudin is best remembered as a major patron of the Louvre, to which he donated more than 2,100 artifacts from his collectio. The Istanbul Museum, the British Museum, and other institutions also owe him important contributions to their Asia Minor, especially Smyrna, antique collections. Although Gaudin did not himself conduct any excavations on the Arabian Peninsula, his interest in archaeology is clearly documented by his photographs from Al-'Ula and Hegra. 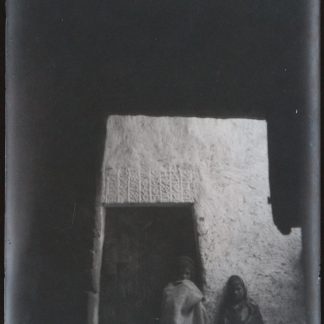