Masterpiece from the Wiener Werkstätte

The elaborate red morocco casket, a masterpiece from the Wiener Werkstätte in the shape of a little house with a curved roof in the Asian style, was commissioned by the Viennese publisher Robert Mohr for the 60th birthday of his possibly most important author, the Viennese humorist Eduard Pötzl (1851-1914), celebrated on 17 March 1911. The design agrees in many details with that of a postcard box created in 1906 by Koloman Moser and Josef Hoffmann for the "Imperial and Royal Military Mail in Bosnia-Herzegovina" (WW Archive, MAK Vienna, see below). While its present counterpart is only stamped "Wiener Werkstätte", it departs from Moser's highly characteristic design merely in the four dented olive-shaped feet which replace the legs and in the ornamental gilt dots along the gable, used in place of a row of tiny balls, for which reason the design can be attributed to Moser with a high degree of certainty. The postcard box was realised only in late 1910 or early 1911, more or less simultaneously with the present coffer, at a time when Moser had already left the Wiener Werkstätte - which explains why Hoffmann was named as the executive artist.

The interior of the lid bears the publisher's gilt dedication with the date of the jubilee. To facilitate the removal of the loosely stored cards, the front of the box folds down upon opening - a characteristic feature of the Viennese tradition of box-making. All birthday greetings are inscribed on pre-printed square cards bordered by triple rules incorporating the date of Pötzl's 60th birthday. Among the many other noted contributors who form a Who's Who not only of the Viennese literary and art scene in the first decade of the 20th century are Peter Altenberg, Raoul Auernheimer, Hermann Bahr, Vincenz Chiavacci, Felix Dahn, Josef Engelhart, Franz Karl Ginzkey, Max Kalbeck, Alexander Roda Roda, Peter Rossegger, Felix Salten, Hugo Salus, Richard Schaukal, and Jakob Wassermann.

Trained for the law, the sometime civil servant Eduard Pötzl soon entered the world of journalism, editing the widely circulated "Neues Wiener Tagblatt", writing courtroom reports, satires of Viennese society, short stories, and humoristic sketches (cf. Giebisch/Gugitz, p. 305f.). He is commemorated by an honorary gravesite in Vienna's Central Cemetery and a street named after him in the city's 18th district. 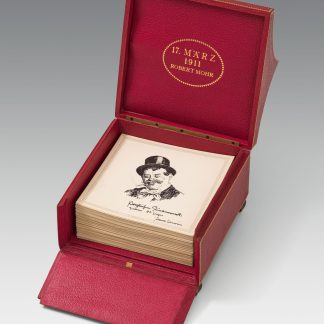