A superb example of Limoges Romanesque manuscript production of the first half of the 12th century, written by Petrus del Casta for the Augustinian Abbey of St-Jean-de-Côle, containing one of the earliest surviving texts of the Glossa Ordinaria.

Petrus del Casta is known from the colophon in a Homilies on Ezechiel (ex Phillipps no. 934/2708, then Chester Beatty W MS 18, sold at Sotheby’s, 3 Dec. 1968, lot 4, to Maggs; subsequently Abbey Sale, 20 June 1978, lot 2976) and has been associated with at least three other splendid manuscripts of the period: the spectacular Limoges Missal (Paris, BnF, Mss. Latin 9438); a Bible at the Bibliothèque Mazarine (lat. I and II); and the Bible of Saint-Yrieix (Bibliothèque municipale de Saint-Yrieix, Ms. 1). According to Danielle Gaborit-Chopin, he may also have been an illuminator (see D. Gaborit, "Deux bibles limousines du début du XII siècle", Bulletin de la Société nationale des Antiquaires de France, 1970, pp. 197f.).

The Glossa Ordinaria was one of the great achievements of the early 12th century: a combination of the scriptural text interwoven with patristic and mediaeval commentaries used by students and teachers until the end of the Middle Ages, originally compiled under the direction of Anselm of Laon (d. 1117) and his brother Ralph, but gradually augmented over the decades that followed. This is therefore one of the earliest witnesses to the Glossa, found here in its unfinished state, extending throughout the Pauline Epistles, with the Canonical Epistles glossed in a contemporary but probably different hand as far as f. 138v and then stopping.

Condition: first leaf fragmentary and opening leaves gnawed at edges, lacking leaves after ff. 24 and 46 with the opening of 1 Cor and 2 Cor, a gathering after f. 139, and a number of leaves at the end. Some wormholes, occasional marginal staining and natural flaws to the vellum, lower margin of f. 116 cropped without affecting text, else in good condition.

Provenance: this is one of an important group of manuscripts written in Limoges mainly by the scribe and illuminator Petrus del Casta for the Augustinian Abbey of St-Jean-de-Côle in Perigord, founded ca. 1083 by Raynaud, Bishop of Perigueux (1081-99). Sold at Christie's, 17 Nov. 1976, lot 366; subsequently Quaritch, 2005. 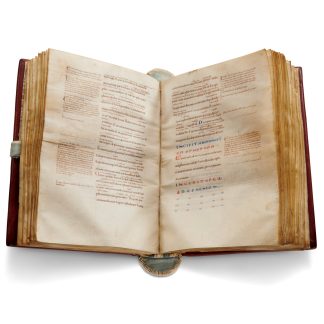