A cross-cultural Euclid: owned by 16th century Arab in France

First Latin edition of the "Elements" published by Hervagius. Remarkably, this copy clearly was in the hands of an Arabic speaker in France soon after printing, as it bears notes in Arabic and Latin on title and last leaf ("Euclid the Philosopher ... there is no God but God", "The book of Euclid the philospher on geometry in the Latin language ... There is no God but God Amen", and "In the city of Paris centre of the peoples of the earth" etc.).

This edition is joined for the first time in print by Euclid's only work on mechanics, "De levi et ponderosa", not hitherto known in any Greek manuscript. "According to Arabic sources, [Euclid] wrote a Book on the Heavy and Light, and when Hervagius was about to publish his 1537 edition there was brought to him a mutilated fragment [...] it is the most precise exposition that we possess of the Aristotelian dynamics of freely moving bodies" (DSB IV, 431). The edition also contains several of his smaller tracts on spherical geometry ("Phaenomena"), optics ("Perspectiva"), geometrical exercises ("Data"), which had joined previous editions, and commentaries of both Campanus and Zamberti, as well as the "Protheoria" by Marinus of Sichem. This copy is complete with the preface by Melanchthon often censored in other copies (cf. Thomas-S.). Herwagen was responsible for publishing the Greek editio princeps in 1533.

Ink underlinings and marginalia in Greek to preface. Corners of binding repaired, as are the upper joint and head and foot of lower joint. Blank corner of m5 torn away, tiny marginal hole in o5, occasional insignificant spotting and browning. Various pen trials and scoring of front free endpaper into geometric circles. 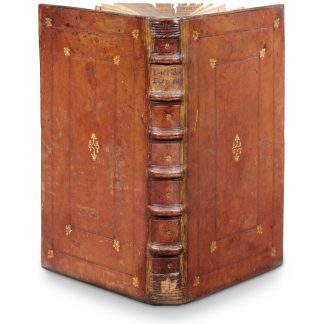