Rare material related to the 1952/53 Grand Jury investigation of an alleged international oil cartel: a brief report on personnel, hours and number of reproductions accomplished by the Aramco office of Dhahran district seeking to comply with the subpoena of August 1952.

The subpoena instructed Aramco to produce hundreds of documents, comprising substantially all their records relating to foreign operations for the past 25 years, before the Washington Grand Jury. The proceedings arose from a lengthy report to the Federal Trade Commission on petroleum operations of two foreign and five American companies and their subsidiaries and affiliates in the production of crude oil and petroleum products in foreign lands. In 1953 Aramco's motion that the company be dropped as a defendant was granted. On 21 April 1953 the Department of Justice filed a civil suit against the Standard Oil Company (New Jersey), Socony-Vacuum Oil Company of California, Texas Company, and Gulf Oil Corporation, charging them with establishing a "combination and conspiracy and monopolization" in violation of the Sherman Antitrust Act and the Wilson Tariff Act. 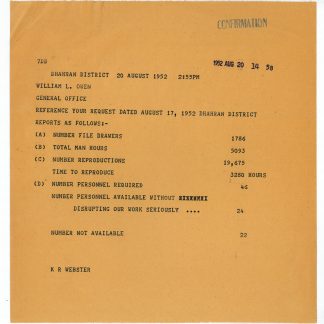