First edition. The complete five-part handbook series prepared by the Arabian American Oil Company for the benefit of their staff as operations began to expand after WWII. Intended "for the purpose of simplifying and facilitating the spreading among Aramco's American employees of general information", the booklets were "designed to give [...] information about the Aramco enterprise itself and about Arabia and the Arabs which will help employees understand the reason behind Aramco policies and objectives" (vol. I, p. II f.). Although intended for the instruction of Aramco's own employees, the series "attracted widespread interest outside the company and the demand of copies was so great that two years later, in January 1952, a revised hardbound edition was published" (Nawwab). This revised second edition combined the five original booklets into two volumes. Subsequent editions in a single volume appeared in 1960 and 1968.

Part I discusses the history of oil production and the role of the United States, in particular the evolution of Aramco oil exploration in Saudi Arabia, emphasizing the company's pioneering role in the country. Part II describes the work and life of Aramco employees in Saudi Arabia. Parts III-V provide some background on Arabia and the Middle East, including information on the Saudi government, the Arabian culture and customs. 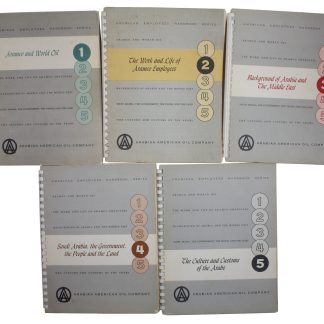