Third edition. Scarce Aramco poster of Arabian wildlife. Featuring pictures taken by Aramco employees, it presents animals frequently encountered in the desert, including a porcupine, camels, sheep and gazelles. The poster also mentions the peculiar sport of "donkey polo" invented by Aramco employees: "Not until American oilmen came to Saudi Arabia was the burro used for any purpose except as a beast of burden. In 'donkey polo', an amusing sport invented by the oilmen, burros substitute for polo ponies". 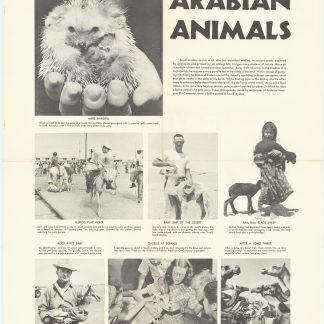