The Dhahran archives of Larry Barnes, the "Walter Cronkite of Arabia"

[Arabian American Oil Company]. A collection of slides, hectographed material and ephemera relating to the career of an Aramco engineer in Saudi Arabia.

A remarkable trove of material collected by the Aramco engineer Lawrence "Larry" Barnes (b. 1923), author of the 1979 memoir "Looking Back Over My Shoulder", one of the very few books describing the everyday life of Aramco's U.S. staff in Arabia during the 1950s and 1960s.

Educated at Syracuse University, where he graduated in 1943 with a B.Sc. degree in Electrical Engineering, Barnes first set foot in Saudi Arabia in 1947 and remained there until his retirement in 1977. Sometimes called the "Walter Cronkite of Arabia", he later served as a respected political talk show host for a New Hampshire radio station. His present archive includes substantial material from his professional life in Arabia, including extensive job logs documenting his tasks as an electrical engineer at the Dhahran facilities from 1949 to 1951, among which figures the electrification of the Emir's palace at Hofuf and of the Crown Prince's Palace in Riyadh.

A set of 36 Kodachrome colour slides provides a rare insight into the demanding work environment of Aramco personnel, documenting the cohabitation and collaboration of American and Saudi staff.

The hectographed matter includes intriguing material issued by Aramco for internal use. Perhaps the most striking part of this ensemble is a series of documents relating to the 1952/53 Grand Jury investigation of Aramco's role in an alleged international oil cartel. It includes the subpoena that instructed the company to produce hundreds of documents, comprising substantially all their records relating to foreign operations for the past 25 years, before a Washington Grand Jury. In 1953 Aramco's motion to be dropped as a defendant was granted. Several further documents relating to this affair, seeking to comply with the demands of the subpoena, reflect the impact this affair had on daily operations in the offices at Dhahran.

The remainder of the hectographed material includes terms of employment, a notification to Barnes regarding his imminent departure for Dhahran, study material for Arabic lessons, a management guide, a packed schedule of recreational activities, and a guide book for a tour to the Al-Hasa Oasis. Further material comprises information sheets on baggage restrictions, the wrapping of Christmas gifts, fire prevention, and means of communication with Aramco employees in Saudi Arabia issued to their families in the United States. A report of the construction of the second gas oil separator plant at Uthmaniyah between 19 September 1954 and 22 November 1955, a practical introduction for trainees at the Sidon Training Center, plans for the improvement of the living conditions of Aramco employees working in the district of Dhahran, and two telephone directories containing instructions for proper behaviour on the phone complete the picture.

Agreeing with the spirit of his memoir, Barnes's archive paints the vivid picture of a wide-ranging, happy expat family life in Saudi Arabia. Among the more private items are 14 girl scout calendars packed with entries on appointments, excursions, birthdays and guests, as well as an elaborate yearbook of the Aramco schools.

Remaining items comprise a temporary and 2 definite driver's licenses, lively accounts of softball games, and 2 typed letters, one from an Aramco official to Barnes's father about his son's departure for Saudi Arabia, another by a Saudi Arabian Airlines official to Larry Barnes with thanks for his assistance after an accident in Dhahran. The collection is topped off by a multi-media educational kit on Saudi Arabia, including a miniature flag of the Kingdom, sample coins, stamps, and worry beads, as well as an introductory booklet on Saudi Arabia and extensive information on the country, its geography, history, and culture, spread out on 24 folding instructional posters. Originally intended for U.S. teachers, the set was also made available to university graduates considering a career in the oil industry.

A fascinating ensemble combining material from corporate history with the private enterprises of an Aramco expat. Detailed list available on request. 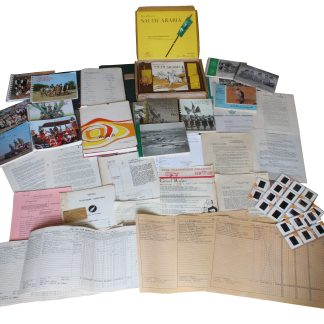