Medical manuscript including treatments for scabies

Al-Azraq, Ibrahim ibn 'Abd al-Rahman. Kitab Tashil al-manafi' fi al-tibb wa-al-hikmah al-mushtamil 'ala shifa' al-ajsam wa-kitab al-rahmah [The Facilitator of Utility on Medicine and Wisdom; including the Curing of Bodies and the Book of Mercy].

An early 17th-century manuscript of a 15th-century work by the Yemeni author Ibrahim ibn 'Abd al-Rahman ibn Abu Bakr al-Azraq (or al-Azraqi, d. ca. 1485): a book of remedies dealing with medicinal uses of seeds, grains, and other foods and their nutritional value, including treatments for scabies and improvements for sexual performance. The material is based in part on two earlier works: "Shifa' al-ajsam" (The curing of bodies) by al-Azraq's teacher Muhammad ibn Abu al-Ghayth al-Kamarani, and "Kitab al-rahmah" (The book of mercy) by al-Sanaubari, another Yemenite physician. In the introduction, al-Azraq writes: "In the words of the Prophet [...] there are two classes [of persons] which people will always need, doctors for their bodies and the 'ulama' for their religion." The book is arranged in five sections: natural science topics; description of various seeds; the nature of foods and medicines and their benefits; means to keep the body wholesome during times of health, including the hadith and recommendations by learned men; treatment of illnesses confined to each member of the body; treatment of general illnesses; and other topics including the (therapeutic) recitation of scriptural and other religious verses. While the "Facilitator of Utility" is listed in the famous bibliographic encyclopedia of Katib Chelebi (1609-57), little is known about al-Azraq. The first printed edition of his work was prepared in Cairo in 1886.

Copied by Salih ibn Ali al-Shiqaqi from al-Ahbub, a district in Sana'a, Yemen. Provenance: 1929 CE ownership inscription in purple ink on the last page after the colophon: "This book belongs to Nasir Muhyi al-Din al-Kabir who bought it from Salih Sabar Ajlan for 4 Riyals in Muharram 1348" (both names appear to point to the Nejd region of modern Saudi Arabia). Latterly in a private UK collection. 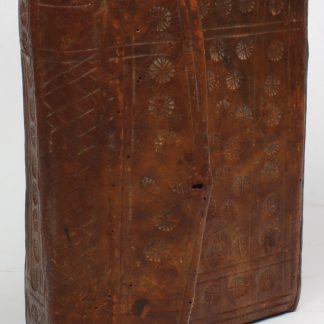