"A mine of information on the development of the modern Gulf"

Calcutta, Office of the Superintendent of Government Printing, 1901.

First edition. A separate annual "Administration Report" on the Gulf region which the British Political Residents submitted to the Indian Viceroy and Governor. The bland official title belies the true value of the series, which has been called "a mine of information on the development of the modern Gulf" (Cambridge Archive Editions). Regularly the reports contain political details of the local sheikhdoms as well as trade information. The present issue offers a detailed introduction by the resident British Consul and Political Agent C. A. Kemball, commenting on the Sultan, his tours, customs and taxes, slave trade, and an outbreak of disease ("small-pox of a severe type appeared at Shargah in the first week of April, causing, it was reported, about 500 deaths"). Kemball further reports on a "Pearl Dispute" in which "the Sultan was interested, connected with the discovery and sale of a pearl of extraordinary value", which has "at last been amicably settled by a committee consisting of certain of the Trucial Chiefs". The Consul "visited the Arab Coast in December and met the Chiefs of Shargah [Sheikh Saqr bin Khalid Al Qasimi] and Ajman [Sheikh Abdulaziz bin Humaid Al Nuaimi]. The Chief of Abu Dhabi [Sheikh Zayed bin Khalifa Al Nahyan] was away in the interior, but I saw his son [Khalifa bin Zayed bin Khalifa Al Nahyan] and other principal men [...]". He also discusses the dispute between the Chiefs of Abu Dhabi, Sharjah and Ajman over the colonisation of Al Zorah by the Al-Suwaidi, the July 1900 coup by which Sheikh Abdulaziz bin Humaid Al Nuaimi seized power in Ajman, and the newly established joint rulership of Sharjah and Ras Al Khaimah by Sheikh Saqr bin Khalid Al Qasimi, which would last until 1914.

The "Administration Report on the Persian Gulf" was published under various titles annually between 1875 and 1957. Original specimens are almost unobtainable in the trade.

Binding rebacked with tape. Provenance: removed from the London Library, with their printed label on the upper cover and their stamps (in blind and printed) on title-page and final leaf, accompanied by cancel stamps. 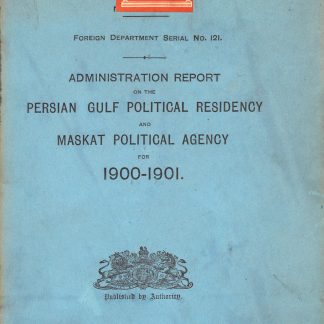