The only known copy of a secular-themed Battala woodcut, illustrating the Raja's court

Woodcut on paper. An evocative court scene in an ornamental woodcut border, title and impressum in Bengali within a cartouche situated at bottom centre.

The only known copy of a Battala woodcut showing a lively scene at the court of an Indian Raja, with the Raja and eminent courtiers, European colonial officers, musicians, dancers, and even dogs present. This is a very rare example of a Battala woodcut print, which were produced in the early to mid 19th century in the Battala neighbourhood of Calcutta (Kolkota). These prints showed often somewhat crude but evocative religious or secular illustrations, produced for people of the lower economic classes who could not afford the watercolours that inspired these woodcuts. An estimated number of only 100 to 200 prints of these Battala woodcuts have survived, as they were printed on cheap, thin, low quality paper stock.

During the early 19th century, there existed in Kolkata a substantial industry of woodcut printing. The artists, publishers and printers were active in the Battala neighbourhood, in the northern part of the city, after which the surviving woodcut prints are named. Large, single-leaf woodcuts - like the present example - were produced as cheaper versions of the already inexpensive watercolours called patas, which were in turn inspired by illustrated Mughal manuscripts. The patas were sold from stalls in the southern part of Kolkata, near the Kalighat Kali Temple, a renowned Hindu temple that is also regarded as one of the 51 Shakti Peethas of India. It was then, and still remains, an important pilgrimage destination; the patas, and later also the woodcut prints, were sold to the pilgrims as souvenirs. As the Battala woodcuts were inspired by and based on these patas, it is little surprise that one of the most famous Battala woodcuts is that of the Hindu goddess Kali, of ultimate power, time, destruction and change. While most Battala prints feature religious illustrations, other specimens show past and contemporary celebrities, mansions of the rich, fairs and festivals, and other secular themes, including the Raja's court, as in the present example.

The existence of the Battala prints, alongside the pata watercolours, was short-lived: they emerged and became popular in the early 19th century and by the end of the century had almost completely disappeared due to the arrival of lithography, a simpler, less labour-intensive process that was capable of producing cheaper prints, even in colour.

Condition: paper somewhat worn, mainly along the lower margin, slightly affecting the border and lower right corner of the illustration. The top and lower margins have been slightly reinforced on the reverse. Overall in good condition. One of a very small number of surviving Battala woodcuts, the only known example to show the Raja's court. 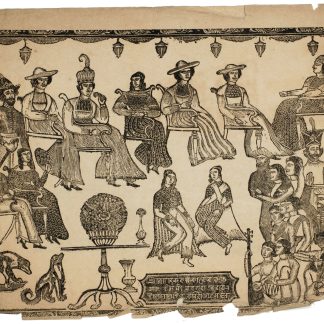