Offprint, signed in full and inscribed to Jean Paul Sartre

Singular material evidence of Sartre's visit to Freiburg in 1952 and the personal relationship between two of the leading figures in continental philosophy from the mid-twentieth century.

Heidegger's influence on Sartre's thought was gratefully acknowledged by the French philosopher from early on in his career as an author. The very title of Sartre's essay in phenomenological ontology, "L'être et le néant" ("Being and Nothingness", 1943) referenced Heidegger's own "Sein und Zeit" ("Being and Time"), which had been published a decade earlier, in 1934. Despite the two thinkers' initial mutual admiration and the apparent overlaps in their thought, their differences became progressively clear throughout the 1940s. Heidegger reacted strongly to Sartre's "L'existentialisme est un humanisme" ("Existentialism is a Humanism", 1946) in a letter to his friend Jean Beaufret. This letter was published the following year in redacted form as "Über den Humanismus" ("On Humanism"), often referred to as the 'Humanismusbrief'. Undeterred by this and increasing criticism of his 'imprecise' engagement with Heidegger's ideas among contemporary commentators, Sartre arranged to meet with his German colleague in December 1952 (cf. Janicaud I, 133f.; Thomä 430). Having been invited to give a lecture (where he found his reception by the students somewhat "cold", (De Beauvoir 311), Sartre had a short meeting with Heidegger at which, "il me regardait avec une infinie pitié. À la fin, je parlais à son chapeau" ("he looked at me with infinte pity. In the end, I was talking to his hat", Cau 253).

Whilst the experience seems thus to have been disappointing from Sartre's point of view, Heidegger nonetheless took the trouble to send him the present offprint "zur Erinnerung an den Freiburger Besuch" ("in memory of the visit to Freiburg") on 12 February 1953. Heidegger's essay on the central concept of 'Logos' opens with reflections on Heraclitus' Fragment B50 and appeared as a chapter in the Festschrift published for the 70th birthday of the art historian Hans Jantzen.

Light browning throughout. The front cover is detached. 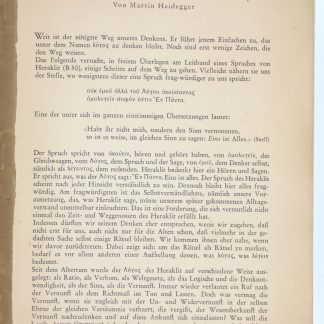