"Looking at zebra is good for the eyesight"

One of the most important books on pharmacology written in Persian in the Islamic era. Ansari Shirazi (1329-1403) was a famous physician of the Mughal period, serving at the court of Sultan Jalal ud-Din Shah Shuja (1333-84). During Ansari Shirazi's years at court the Sultan was a patron of the poet Hafez (1325-90), icon of Persian poetry, whom Ansari Shirazi would have known personally. Another esteemed acquaintance appears in the title of this particular book, "Selections for Badi". The work is dedicated to a woman, allegedly a Persian princess named Badi al-Jamal about whom little is known.

The work itself is a gem of Persian medical literature: scholars have claimed that "in the history of Persian medicine, the book 'Ikhtiyarat Badiei' is considered the most important book written in Persian", citing the large number of sources and remedies it provided the mediaeval reader, though some irrational fallacies are noted as well: "In three entries in Ikhtiyarat Badiei, the author has illustrated some superstitious ideas, namely that 'If the food is poisonous, and the weasel finds out, it will shout and its hair will stand on its end' and says: 'looking at zebra is good for the eyesight'" (Ghazi Sha'rbaf, 99).

The scribe responsible for copying the text was Muhammad Qasim Quraishi Siddiqui, who is known to have been active in India in the 17th century. A few minor stains and soiling; altogether a well-preserved and vital piece of Persian scientific history.

Cf. Javad Ghazi Sha’rbaf et al., "Introducing the Book Ikhti-yarat Badiei: An Investigation Over its Importance in the Pharmacology of the Islamic Period", in: Journal of Research on History of Medicine 9.2 (2020), pp. 95-102. 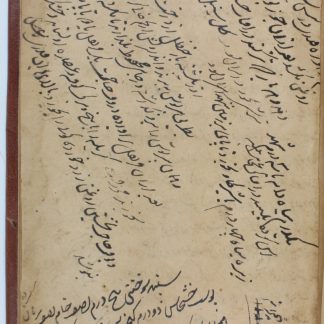