The present guestbook with more than 230 entries of varying length constitutes a fine document of Rilke's sojourn on Capri, where he had been invited as guest of Mrs. Alice Faehndrich, née Baroness of Nordeck zur Rabenau, sister of Countess Luise Schwerin. The poet spent the winter and following spring of 1906/07 on the island, "from December 4 to May 15 [...] living the life of the House of Roses attentively and gratefully“, as he penned on the day before his departure. His wife Clara, too, was twice a guest at the glamorous villa: on Jan. 14, on her way to Egypt, she pays her thanks "for being honoured with two beautiful days at the Villa Discopoli as an unexpected present on my journey - between Berlin and Egypt", and after her return she spends the last few weeks there with her husband: "returned from Egypt the 20th of April, I was received and indulged until May 15 in the dear Villa Discopoli". Rilke's brief but grateful entry does not reveal that here he composed his "Improvisations from the Capri Winter“, a work that points beyond his "New Poems". Other guests at the Villa whom Rikle must have met during his stay there included Wolfgang von Tirpitz (the son of Alfred von Tirpitz), Ferdinand von Martitz, and Franz von Niebelschütz. The encounter with the with most far-reaching consequences, however, was that with the young Countess Manon zu Solms-Laubach, a niece of the Hereditary Count Friederich (1833-1900). After her departure, a correspondence ensued which by 1913 was to comprise on Rilke's side no less than 19 letters and a calligraphic transcription of what is possibly Rilke's most famous poem, "The Panther".

Rilke and his wife had known the sister of their hostess Alice (called "Alla" in the guestbook), Countess Luise von Schwerin, née Nordeck zu Rabenau, since 1905, when they had met in Dresden. At the beginning of his stay, Rilke had been the only guest, but with the arrival of Alice, Julie von Nordeck ("Nonna"), and Manon zu Solms-Laubach his solitary position ended. "The exploration of Anacapri, the ascent to Monte Solaro, the visit to the grotta of Migliera and to the little church of Sarita Maria a Cetrella unlocked a countryside similar to Greece [...] During the evenings, the ladies were an attentive audience, when they sat doing their needlework or peeling him an apple, ready to hear his day's work [...]“ (cf. Donald A. Prater, Ein klingendes Glas. Das Leben R. M. Rilkes, Hamburg 1989). 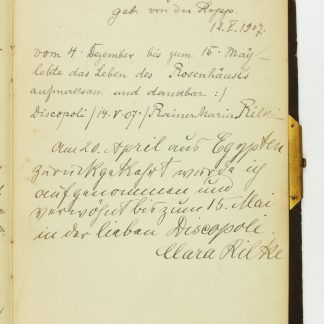