14 maps of the 25-map series published between 1966 and 1971, including the complete set of the first 13 maps. Many photomaps based on aerial reconaissance and photomosaics, showing geological or geochemical information. Some sheets include location diagrams, text, notes, cross sections, charts, index map, and insets. The mapped resources also concern ancient gold mines. Among the credited cartographers are some Arabian scientists, but mainly Americans: James Mytton, Robert F. Johnson, Virgil A. Trent, C. W. Smith, J. Kouther, M. Q. Asad, Gerrit Eijkelboom, Mohammed Gendi, Bernard Henry, Xavier Leca, Mohammed Shanti, Phillippe Delange, and Jean Pflaum. Abdullah O. Ankary contributed to the text of several maps, and much of the geology is based on work done in the 1950s and early 1960s by Glen F. Brown, one of the pioneers of the partnership between the U.S. Geological Survey and the Saudi government which began in the 1940s, spanned the next five decades and played such an important role in the development of the kingdom. The map and envelope design closely match that of the geological maps of Saudi Arabia issued by the USGS since the 1950s. 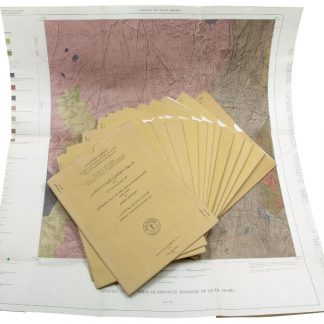