Significant collection of 333 Bibles, expositions, scriptural lessons, biblical school primers, and other extremely rare products of missionary presses. Many items unrecorded in Darlow & Moule, and several important 19th century works unrecorded in the OCLC database of worldwide libraries. The collection's main strengths lie in 19th and early 20th century publications produced for/in Africa and India (some 89 Indian and 58 African works) as well as hundreds of 20th century works in almost 80 further languages, ranging from Rarotongan to Miskito. Generally in original or period bindings and often with ownership markings of missionary societies, the collection paints a fascinating picture of missionary efforts of the 19th and 20th centuries. Highlights include an extremely rare edition of the New Testament printed in Tranquebar, South India in the Tamil language in 1758 by a Danish missionary, Bartholomaeus Ziegenbalg (this very copy fetching nearly $4000 at Sotheby's in 2000) and a wonderful color-illustrated edition of Bunyan's Pilgrim's Progress translated into the Niger-Congo (Dualla) language in 1885.

More than simply offshoots of the colonial enterprise, missionary movements set up their own presses in colonies such as Cameroon and Calcutta and began printing titles such as the present ones, usually in runs of 1000 or less. These publications often represent the first appearance of native languages in print form, shaping future efforts at graphic and textual representation of mainly spoken languages. Interestingly, many of the present volumes also represent the first language guides to several African and Indian languages, prepared by missionary presses to facilitate the conversion of natives. "Much of this activity stemmed from the importance placed by Protestants on a literate population which could read and study Scripture for themselves" (Weber, p. 2). The present collection clearly demonstrates how missionary directives, while often fueled primarily by a desire to 'save souls' and 'convert heathens', also concerned themselves with children's education (N144), health (N271), the management of schools (N261), agriculture (N65), mothercraft (N278), and language learning (e.g. N91, N161, N256).

The importance of the printing press and its products to the missionary efforts of the 19th and 20th century has rarely been directly addressed in the secondary literature. Robert E. Frykenberg's "Christianity in India: from beginnings to the present", for example, hardly touches on missionary presses at all, perhaps due to the copious and diffuse nature their printings. Yet the importance attached by contemporaries to the power of the press should not be underestimated. Writing in the The Baptist Missionary Magazine of 1840, a Mr Crocker expressed the heartfelt need for printing press in the West African colonies: "That God designs to employ the press as an important instrument in diffusing the light of truth, we have abundant evidence [...] It is true, in this country the people cannot read. But the press is required to furnish them books that they may learn to read [...] It seems desirable that boys of great promise should have the stores of English literature open to them." His petition was duly granted several years later, when the first mission press was established on the Cameroonian mainland in 1844 (cf. early examples from the "Mission Press, Western Africa" in numbers N149, N150, N130, etc).

Many of the present works were acquired from what must have been the greatest such institutional collection of its time, the library of the Baptist Mission House in London. - Of the utmost rarity are not only the early imprints of African missionary presses, but also the briefer, soft-bound pamphlets issued by these presses whose survival rate must be minimal. We find numerous examples in this collection of such pamphlets which are either unrecorded (eg N 93, N275) or recorded only in the Darlow and Moule collection at Cambridge University Library. 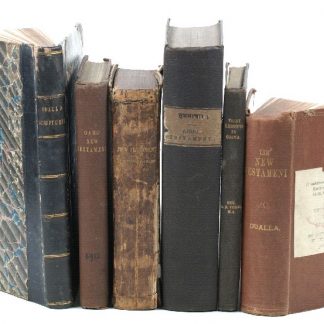