To Edward Armstrong Bennet (1888-1977), a psychiatrist and Jungian analyst, about disputes among his London disciples: "[...] There is something in that London group I noticed already quite a while ago: a sort of unnatural prestige psychology. The way they handled the situation seems to me awfully immature and clumsy. I can't understand Fordham. The way you dealt with the situation seems to me entirely reasonable and adequate. May I keep the copies of the correspondence you sent me for a while? They might be useful in case of further discussions. I have seen Dr. Philp whom I had met once in your house. I couldn't quite make out what his theological or psychological problems are [...]".

E. A. Bennet had been Jung's foremost advocate in England since the 1930s.

On headed paper; some slight edge damage. Includes a letter to Bennet by C. A. Meier, concerning the controversy Jung discusses in his letter, some letters of response from Bennet to Jung, Meier and others, typescripts of papers by Jung's associate, Toni Wolff, "Some Principles of Dream-Interpretation" (April 1934; 36 ff.) and "A Few Thoughts on the Process of Individuation in Women" (undated; 48 ff.), as well as an obituary brochure for Toni Wolff and some related material. 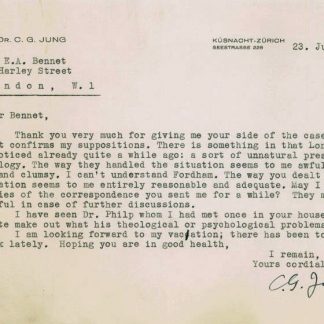