By the illustrator of Winnie-the-Pooh

Fine, large horizontal watercolour picturing a noble lady nude in the bathtub under a parted canopy, with ladies-in-waiting staring aghast or trying to shield their mistress from view, while four puttos gracefully fly from the canopy, a gentleman in 18th-century costume, seated on a sopha, faces the scene, and a small orchestra plays at far right.

A rare example of a risqué drawing by Shepard, best known for shaping the definitive image of "Winnie-the-Pooh", but also a prolific staff-member of "Punch" and illustrator of favourites such as "The Wind in the Willows" and "David Copperfield".

Some spotting. Signed in red "Ernest H. Shepard" at lower right. While the drawing is clearly marked for reproduction (size markings; notes "Sketch 3 Colour Double"; "Henry Stone" [i.e., the Banbury-based colour printing and photo-engraving concern], etc.), it is unclear if it was actually published - the book for which it was intended could not be traced, and the subject matter does not fit easily into the artist's known canon, the flamboyant period costumes reminiscent of his work for "Everybody's Pepys", but also showing Shepard as a highly accomplished, albeit tamer disciple of Aubrey Beardsley with an inclination toward Rococo rather than Art Nouveau. 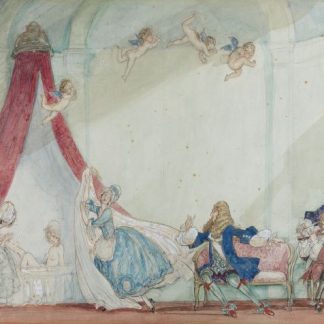