More than 1100 volumes on horse breeding

[Arabian Horse Breeding]. A library on Arabian horse breeding, including Stud Books and General Reference. From the Le Vivier, Marcia Parkinson and Finkelmeyer Family Collections, with Additions from the Library of Duke Maximilian in Bavaria.

The largest collection of its kind in private hands. 330 works in more than 1100 volumes. Mostly original or first editions. Published in Austin, Cairo, Chicago, Hildesheim, London, Marburg, Moscow, New York, Philadelphia, Riga, Tehran, Warsaw and other places in the years 1788 to 2011.

Amassed over the last fifty years and covering four centuries of relevant material, the present collection spans all aspects of the history and development of the breeding of Arabian horses. It comprises within itself many books from the Le Vivier collection: fine press books of racing and thoroughbred literature produced by Eugene Connett's famous Derrydale press, as well as numerous important items from the library of Duke Maximilian in Bavaria (1808-88), himself a great enthusiast of Arabic horses. We here find the early Arabian Horse Registry of America Stud Books, and many items also bear presentation inscriptions from the authors (Carl Raswan, Gladys Brown Edwards, etc.). The common practice in such a specialized field, most of the publications here were issued for a very limited circulation in runs of 1,000 or fewer individually-numbered copies.

As a reference library for breeding the collection is unparalleled: almost any Arabian horse's forefathers will be found amongst the exhaustive stud books and breeding serials from the 18th to the 20th century, from Egypt, Australia, Iran, Spain, Russia, the USA, etc., often with accompanying photographs. Perhaps the most famous reference work is the Raswan Index, of which only 380 copies were printed (and many destroyed by a flood). Raswan became an expert on the Arabian breed through his lengthy trips to the desert, where he lived with the Bedouins and learned their language and customs. Several scarce early 20th century works also testify to the Western fascination with the Bedouin and desert roots of the Arabian horse: Homer Davenport's 'My Quest of the Arabian Horse' (1909) and Raswan's 'The Black Tents of Arabia: My Life Amongst the Bedouins' (1935).

Alongside modern surveys of the key centres of horse-breeding in the Arab world, the early Western classics are also found here in their scarce first editions. French and German authors are also well-represented, including the text and first French translation of the 'Hilyat al-fursân wa-shi'âr ash-shuj'ân', an abridgement of Ibn Hudhail's horse treatise, prepared around 1400. Finally, the owner's collection of notable catalogues and magazines paints a fascinating composite picture of the evolution, and heyday, of Arabian horse-breeding in the Arab world, Poland, America, and the United Kingdom.

Also contained in this magnificent collection are the classic reference works on Arabian and Anglo-Arabian racehorses and their breeding. These standard works and encompassing sets of specialised thoroughbred literature include not only the indispensable guides to horse pedigrees, the Racing Calendar, General Stud Book, Spanish, American and Australian Stud Books, Bloodstock Breeders' Review, and Prior's Register of Thoroughbred Stallions, in near-complete runs stretching back as far as the 18th century, but also British and international horseracing history, and several volumes of exquisite coloured plates.

The size and comprehensiveness of the present collection cannot be overstated; it is safe to say that it represents the largest private collection of its kind which has come up for sale in recent decades. Many of the items found here can be located in just a handful of public institutions worldwide. Such items come into the market so rarely (and have recently, like the Raswan Index and the AHRA Stud Books, commanded prices of five figures) that it would be impossible to build a comparable collection item-by-item; the volumes here represent a lifetime of serious dedication to the task. Yet the value of such a collection lies not simply in its impressive number of important publications, but in the vast amount of practical knowledge contained within. 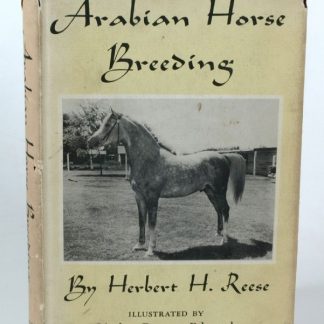