To the wife of a Parisian police official, making enquiries about the female perpetrator of an acid attack on an unfaithful lover. A highly intriguing letter in which the poet, chansonnier and champion of social justice asks for information from the wife of one Brissot-Thivars, employed by Préfecture de Police, on behalf of the family of a young girl imprisoned at St. Lazare for having thrown vitriol in the face of an unfaithful lover. Béranger seems sympathetic, and had obviously been approached by the girl’s family as a result of his reputation as a friend to the unfortunate, especially they young. He writes that the girl, the daughter of a General who had been cruelly treated by the Restoration, and who was previously of good character finds herself imprisoned with common prostitutes. Béranger seems to be taking advantage of his friend Madame Brissot-Thivars' connections, and requests discretion, asking that his name is not mentioned in connection with the affair and that M. Brissot-Thivars knows nothing of his enquiry. He writes that if she cannot help she may simply burn the letter. This "crime passionnel" of vitriol-throwing reached epidemic proportions in Paris later in the century and caused major social concern. 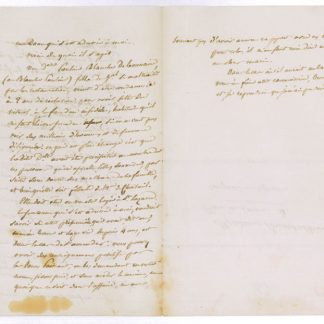