Excuses to his booksellers

To Treuttel & Wurtz, booksellers, rue de Bourbon, Paris, offering "a thousand excuses"; his factotum has made an error. He is himself at their disposal for the work that he requested and his confidence in them is such that their price will be his.

Alibert is noted for his work on skin diseases, for his elegant, fashionable life-style and several medical publications, some of them exploring the interface between medicine, physics and the moral sciences. Treuttel & Wurtz, publishers and booksellers at Strasburg and Paris, were founded by J. G. Treuttel (1744-1826) and later associated with J. G. Wurtz (1768-1841). Alongside publication of the works of Sismondi, Saint-Simon, and Frederick the Great, they produced the notable "Bibliothèque des Voyageurs". 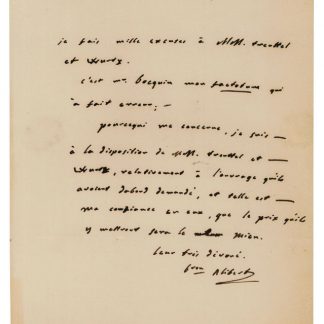