Waqf manuscript from the Great Mosque of Erzurum

A finely preserved manuscript comprising "'arqam" (official notes) related to the Great Mosque (Ulu Camii) of Erzurum in Eastern Turkey, occasioned by the successful completion of major restoration work on the building begun in AD 1639 under the appointed local governor Hüseyn Pasha. The manuscript's opening pages contain a summary of "the estates depending on the complex of the mosque", followed by a catalogue of places, buildings or factories belonging to or administrated by it, such as a "masbaga" (dye-works), a "mamlaha" (saltern), a "madbaga" (tannery, here given with the Turkish translation of the term, "bi't-Turki debag-hana"), etc. Leaf 2r lists both the Great Mosque's officials and contractors or stipendiaries, along with their respective wages ("li'l-mudarris asarat darahim fi kull yawm" - "to the principal of the madrasa: ten dirhams a day"; "li-'l waiz saba darahim fi kull yawm" - "to the (official) preacher of the Mosque: six dirhams a day"; to the first Imam of the Mosque four dirhams a day, etc.). The remainder of the text sets out detailed accounts for the summarized information, but also includes liturgical exaltations of Allah and the Prophet Muhammad, praised in Koran- and Sunan-derived eulogies.

A well-preserved, complete 17th-century manuscript drawn up for the recently restored Erzurum Mosque and its extensive appurtenances, likely also in recognition of their status of inalienability, i.e. the establishment of an Islamic waqf, or mortmain regime. Thus, the manuscript records the mosque's administration in both legal and religious terms, in accordance with the Sunni law of the Ottoman Empire. 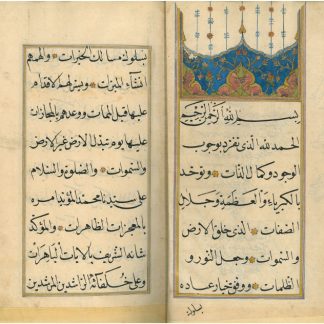