Collection assembled by the young Uruguayan nobleman Alejandro Zorrilla de San Martin (1909-87; Foreign Affairs Minister from 1963 to 1965 and grandson of José Luis Zorrilla de San Martín, the National Poet of Uruguay) by direct application. All signed in Japanese and English. Viscount Saito Makoto (1858-1936), formerly an admiral in the Imperial Navy, signs as Prime Minister of Japan (8 August 1933). General Toshizo Nishio (1881-1960) was considered one of the most successful and ablest strategists of the Imperial Japanese Army. His card is postmarked 5 Sept. 1934. Kichisaburo Nomura (1877-1964), another former Imperial admiral, served as ambassador to the United States at the time of the attack on Pearl Harbor. His signature is dated 9 April 1941, eight months before that event, and is accompanied by a TLS cover letter by the Secretary to the Ambassador. Also included is a TLS from Goro Sakale, son of General Gaishi Nagaoka (1858-1933), who informs Zorrilla that his father, to whom the collector had applied for an autograph, passed away on the 23rd of April. 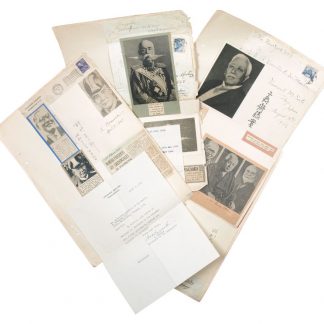