The introduction of electricity to the Islamic world: the earliest surviving manuscript

The original Ottoman Turkish manuscript of one of the most important texts in the history of electrical engineering and science: the complete treatise on electrical fluid, as drafted by the Turkish engineer Yahya Naci the same year. "In the early 19th century, the teaching of science at the Imperial Engineering School in Istanbul was mostly based on the material translated from textbooks compiled for the French 'grandes écoles'. Translations and compilations were generally made by the professors of the school. Yahya Naci Efendi (d. 1824), a lecturer in French language and sciences, compiled in 1812 a treatise introducing the properties of electricity through experiments. His aim was also to show that the lightning flash and the thunderbolt were electrical phenomenons. Yahya Naci's main source was the chapter on electricity of Mathurin-Jacques Brisson's (d. 1795) 'Traité Elémentaire de Physique', a popular book of physics in French colleges. This translation is important because Yahya Naci endeavoured to create Ottoman terms from Arabic regarding electricity and because it points to the initiatives in introducing experimentation in the teaching in the Imperial Engineering School" (Günergün, cf. below). The colophon states the name of the scribe as "Yahya Naqi" and the date "Zilqa'da 1227 H.", proving that the present volume contains the author's long-lost original manuscript.

In very fine condition; only a few insignificant spots. 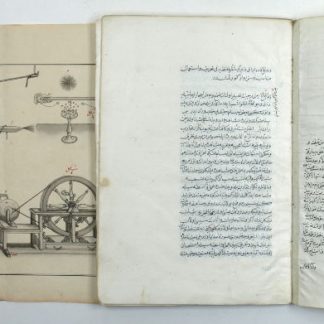