560 x 456 mm. Toned lithograph (the stallion "Sovereign" in its stable at the Royal Württemberg Stud). Captioned in German and English.

Fine lithographed portrait of the thoroughbred Sovereign, foaled by Mervinia and the stallion Champion, and thus a descendant of the Godolphin Arabian on the paternal side and of the Darley Arabian by his mother's line (both lines including Marske and Eclipse). The horse, formerly in the stables of King George IV, had in 1841 entered the famous stud of the King of Württemberg, the first Arabian stud in Europe. Drawn from life by the Darmstadt artist Frederick Frisch (1813-86), sometime court painter to the Margrave of Baden, and lithographed by G. Küstner. Frisch had visited the orient on the commission of the King of Württemberg, painting "The Camp of Ibrahim Pasha" and "Ibrahim Pasha's Retreat Through the Desert". He also published lithographed "Sketches from the Orient" (1843). Mainly a painter of animals, Frisch produced great horse paintings, some of which were exhibited at the 1906 Berlin Centennial. 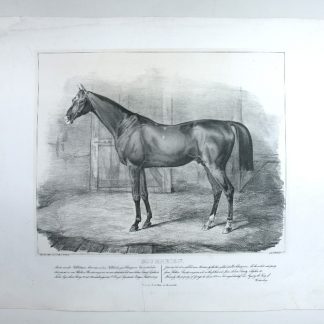