The original edition of one of the most important photo books: the horse in motion, pictured for the first time in history

Philadelphia, published under the Auspices of the University of Pennsylvania, plates printed by the Photo-Gravure Company, 1887.

Large folio. Half morocco, retaining the original cloth covers and gilt cover label. 11 (instead of 21) plates.

Author's Edition. Landmark collection of Muybridge's revolutionary "instantaneous photography", a self-developed technique that allowed for high-precision series of high shutter speed stop-motion photographs. He began his work with photographing horses, but in time it would also include athletes, birds, lions, and even camels. Muybridge first photographed a horse with all 4 hooves off the ground in 1872, after Leland Stanford (later the Governor of California) hired Muybridge to determine whether a horse leaves the ground completely when running, a hotly debated issue at the time. (Stanford believed they did, and Muybridge won Stanford a $25,000 bet.) By 1885, Muybridge had accumulated over 20,000 photographic negatives, or 781 sequential series of photo-plates, shot from multiple cameras at carefully planned locations and angles, each of which showed a human and/or animal engaged in a continuous motion. This required Muybridge to develop cameras for faster shutter closure. In cases where a human or animal moved any great distance, photographing the movement required a team of photographers, rather than a single photographer. Muybridge and H. Allen, a physiology professor at the University of Pennsylvania, published 37 eleven-volume sets which contained a collotype of every one of the 781 photographic series. This "Author's Edition" consists of a selection of the most important collotypes contained in the full work; the present set includes all the plates to show animals: No. 565. Horse trotting.

626. A third horse and rider, running, including several frames with all 4 hooves off the ground.

659. Mule jumping and kicking with his hind limbs.

710. Race hound at high speed, including frames with all 4 feet off the ground.

721. Lion circling along the wall of a small enclosure.

755. Bird flying, including swoops down.

The combined illustrated area of any given plate varies, but is typically about 21 x 30 cms. Muybridge had focused his early photographic work on San Francisco and Yosemite, but had later been sent by the Federal Government to photograph Alaska for the High Sierra Survey. (The latter project was in 1868, shortly after the territory was purchased. He was later sent on a second trip to Alaska to photograph the Tlingit tribe and the Modoc War.) During his time as a photographer, Muybridge owned a racetrack. Late in life, he invented the zoopraxiscope, a primitive forerunner of the motion picture camera. Analyses made possible by the technique later had a wide range of implications for sports, podiatry, physical therapy, vertebrate paleontology, and other fields.

Pastedowns and spine renewed, otherwise an excellent, clean copy in the original boards. 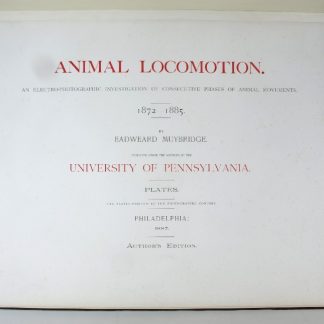