In Russian, to his third wife, Natalya Andreevna (née Manchenka, 1902-90), reporting on how he spends his days, about his appointments with Ivan Klyun and others, about waiting for the meeting of the construction committee, and trying to sell works to a Ukrainian museum: "[...] It is warm outside, but there is still snow in the woods, it's dirty, and it's raining heavily. Less bread will be issued in Moscow as of the 1st, and there will be no white bread. People are hungry [...]". 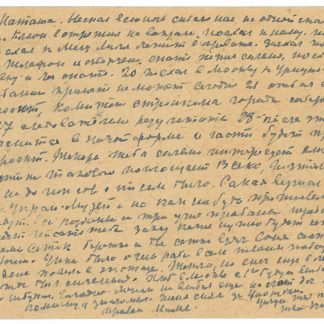