In Russian, a long letter to his third wife, Natalya Andreevna (née Manchenka, 1902-90), in which Malevich describes the terrible situation in which he finds himself: he has no money to receive medical treatment while his health is deteriorating, nor for the rent of his dacha; the landlord is urging him to sign the contract. Moreover, his relationship to his brother Myachislav has become very difficult, Myachislav having "transgressed all fraternal boundaries": "[...] We had no family relationship from our earliest years onwards, but now it has reached a level of indecency which is no longer tenable [...] He is thoroughly an official, and although he knows the situation in which I find myself, he has not left me a single piece of bread or sugar [...] and accuses me of having caused material damage to him by preventing him from marriage [...]".

Small pinhole, touching one letter, but without loss. 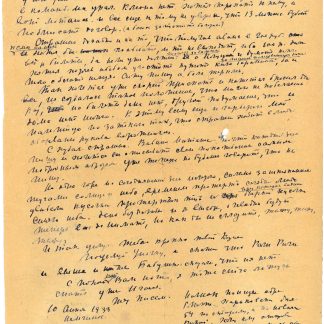