In Russian, to his third wife, Natalya Andreevna (née Manchenka, 1902-90), about some of his paintings that were sold, his return to Moscow, where everyone is happy to see him, and a presentation he attended there: "[...] Yesterday I went to the Academy to hear a presentation by Shutko on Dziga Vertov. It was quite remarkable, and I also saw three performances by Vertov. Eisenstein sulked like a little girl. There was another presentation held by a German from Dessau, but I left before that. The people from ASNOVA [the Association of New Architects] want me to go to Moscow. Klyun will leave on Wednesday [...]".

Kirill Ivanovich Shutko (1884-1941) was editor-in-chief of the magazine "Soviet Cinema". 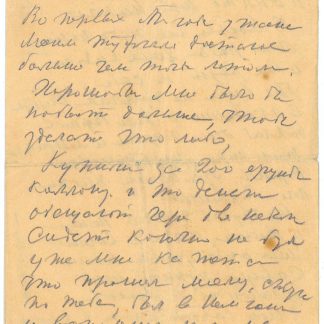