Various formats. Altogether 14 pp. Some minor wear to folded letters. With Mengelberg's calling card, inscribed by him on the reverse: "Edvard Munch Kragerö in Norwegen". 7 items.

Letter 1 (undated) deals with family matters and that everyone misses him. Munch adds that he regrets having been unable to paint Mengelberg's feverish dreams while in Stockholm.

Letter 2 (10 June 1897): Munch writes he wanted to send birthday greetings, but when he left Hamburg he was without money, unable even to afford a postcard. He has sent a lithograph, mentions that Hamsun and Ibsen just passed by his window, and adds he wishes to travel to Paris in the spring.

Letter 3 (10 Jan. 1897): mentions the artist Paul Durand-Ruel, stating that all he exhibits is not symbolic. He also plans to publish an album of lithographs, provided he managed to find more subscribers.

Postcards: complaints that Mengelberg is a poor correspondent.

Richard Mengelberg (1853-1932) wrote, in 1894, an article on Munch's works for the Frankfurter Zeitung. He was father of Nora Mengelberg, whose portrait Munch painted in 1894. He also made an etching of Richard Mengelberg the same year, his first work as an graphic artist. 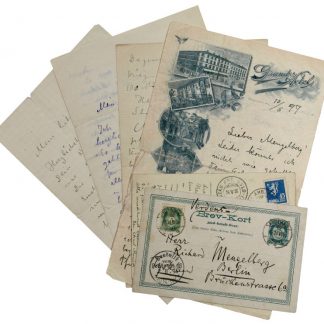