Second original Italian edition, second issue of Ludovico di Varthema's famous travels to Arabia, Persia, and India: the highly important and adventurous narrative containing the first printed eyewitness account of any place in today's United Arab Emirates. On his return journey from Mecca (which he was the first Westerner to describe), Varthema visited Ras al-Khaimah ("Giulfar") and portrayed the city as "most excellent and abounding in everything", with "a good seaport", and whose inhabitants are "all Muslims". While Montalboddo's famous anthology of discoveries, printed in 1507, contained the first printed reference to the Arabian Gulf region, it was Varthema's work, published only three years later, that offered the first actual report from the region by a Western traveller who had visited the coast. All early editions of Varthema’s “Itinerario” are exceedingly rare (even the 2013 Hajj exhibition at the MIA, Doha, only featured the 1654 reprint; cf. below).

The fine title woodcut shows Varthema seated on a bench in front of a building, writing on a globe, behind him a set of dividers; in the background a landscape with a ship at sea and a castle. 18th-century collection shelfmark to title page. A very clean, appealingly-bound copy; a few minor traces of worming have been professionally repaired. Rare; only four copies in international auction records. OCLC lists five copies only (Yale, Trinity College Hartford, NYPL, BL, BnF). 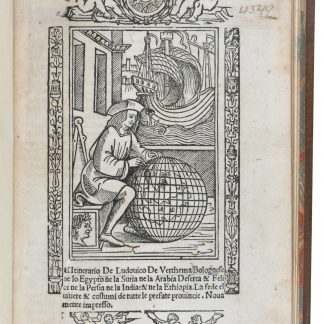