In Praise of the Middle Eastern Horse

Markham, Gervase. Cavalarice, or The English Horseman. [...] Newly imprinted, corrected & augmented, with many worthy secrects not before knowne.

Second edition of this important manual of riding, breeding, hunting, farriery and veterinary matters (following the first of 1607), by one of the earliest western owners of and dealers in Arabian horses. Markham praises the virtues of Turkish and Barb horses, which are said to be "beyond all horses whatsoever for delicacie of shape and proportion, insomuch that the most curious painter cannot with all his Art amend their naturall lineaments. They are to be knowne before all horses by the finenesse of their proportions, especially their heades and necks, which Nature hath so well shap'd, and plac'd, that they commonly save Art his greatest labour: they are swift beyond other forraigne horses, and to that use in England we only imploy them [...]". With notes on saddles and bits (several illustrated), as well as numerous cures for horse ailments.

"Divided into eight books with separate titles. The 2nd and 3rd books bear the date of 1616" (Huth). The title page itself bears no imprint, but rather has the word "Cavalarice" sandwiched between the dates "16" and "17".

Occasional slight browning or marginal waterstaining; several small wormholes to margins near end. Title with dated 1745 inscription, 17th century ink annotation to title verso (traced by a later hand), 20th century ink annotation and tipped-in auction catalogue description to front free endpaper. From the library of Francis McIlhenny Stifler with his bookplate to front pastedown. Scarce; only three copies of this edition sold at auction in the last 30 years. 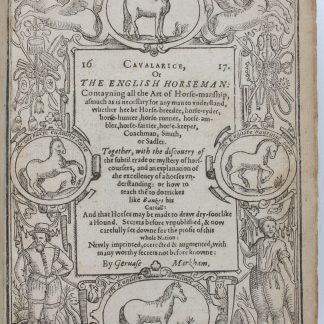