Burton, Sir Richard Francis. Personal Narrative of a Pilgrimage to El-Medinah and Meccah.

First edition of Burton's classic account of his journey across the Arabian peninsula. In the fall of 1852, Burton first proposed to the Royal Geographical Society an expedition to central Arabia with the intent on visiting the holy cities. His request was denied by the RGS and the East India Company as being too dangerous for a westerner, though he was funded to study Arabic in Egypt. Upon arrival there, in April 1853, disguised as a Pashtun and travelling under the pseudonym Mirza Abdullah, Burton made the pilgrimage to Mecca and Medina. "The actual pilgrimage began with a journey on camel-back from Cairo to Suez. Then followed twelve days in a pilgrim ship on the Red Sea from Suez to Yambu, the port of El-Medinah. So far the only risk was from detection by his companions. Now came the dangers of the inland road, infested by Bedawin robbers. The journey from Yambu to El-Medinah, thence to Meccah, and finally to the sea again at Jeddah, occupied altogether from 17 July to 23 Sept., including some days spent in rest, and many more in devotional exercises. From Jeddah, Burton returned to Egypt in a British steamer, intending to start afresh for the interior of Arabia via Muwaylah. But this second project was frustrated by ill-health, which kept him in Egypt until his period of furlough was exhausted. The manuscript ... was sent home from India, and seen through the press by a friend in England. It is deservedly the most popular of Burton's books ... as a story of bold adventure, and as lifting a veil from the unknown, its interest will never fade" (DNB). Indeed, the work would be described by T.E. Lawrence as "a most remarkable work of the highest value." 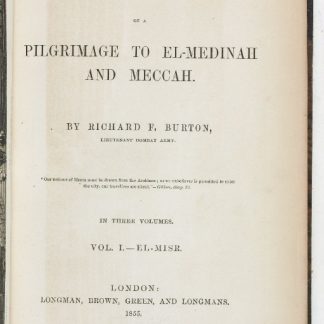