The history, archaeology, and geography of Mesopotamia

Bombay, for the Government at the Bombay Education Society's Press, 1857.

First edition, very rare. The volume includes seven important historical, archaeological and geographical essays covering Baghdad, the Nahrwan canal and large parts of Kurdistan, the topography of Nineveh and the old course of the River Tigris. Also included are some 30 maps and plates, many in colour, most notably the ground-plan of Baghdad. Felix Jones first saw service on the Palinurus, surveying the northern part of the Red Sea, whilst a later commission found him engaged on the Arabian survey under Haines. In 1839 he surveyed the harbour of Graine (Kuwait) and this led to an almost continuous period of service in Mesopotamia and the Gulf, ending in 1862 as Political Agent in the Persian Gulf, in which capacity he planned the British invasion of Persia.

Lacks the large maps of the Katul es Kesrawi and River Tigris. Labels to spine chipped, spine faded, occasional blue pencil markings between pages 259 & 288, and between pages 364 & 368. Generally text and plates very clean and fresh, map at page 136 torn at fold with no loss.

No pocket is present in the rebinding nor are the 3 maps which the pocket should contain. Paper slightly browned, otherwise in good condition. 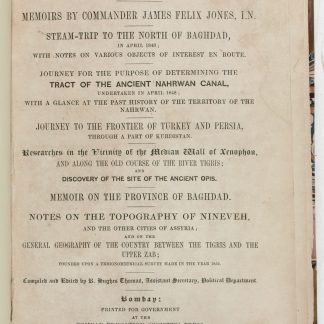