In French, with date, the word "Confidential" and the words "Dear Doctor" at head of first page in Pasteur's hand. On stationery imprinted with his monogram, to an unidentified doctor: "I would be much obliged to you if you could have the letter enclosed herewith given to Representative Wiedersperg, in relation to the motion he just presented to the Austrian Parliament and that was so successful, as it should have been. I also know that it was put together with you in mind. I have just received from Dr. von Frisch the pamphlet containing the sum of his experiments with rabies, a document I have been anxiously awaiting in order to respond to the 16 proposals that appeared in The Medical Week of December 30. What a disappointment! Frisch's pamphlet is so faulty that I will not engage in criticizing it. His experiments and arguments are not worthy of any attention. I will only talk about it if authorized people think it important, no doubt out of ignorance of the issue. That doctor surely deceived me! Since his coming by my laboratory, I had been inclined to consider him an impartial scientist, well versed in experimental practices. I feel disillusioned and, to be brief, I will only give you one justification: he finds Benzi and Amozzo's experiments and their consequences to be good, only too happy to note that they coincide with his own. And when I contradict him with my own positive results and call his negative, he denies me the right to judge his work, and claims that his results are positive. No discussion is possible with a man whose reasoning lacks scientific logic".

Pasteur's own rabies experiments had indeed been successful. In April 1882, he undertook research that proved to be the most spectacular of all-the preventive treatment of rabies. After experimenting with inoculations of saliva from infected animals, he came to the conclusion that the virus was also present in the nerve centers, and he demonstrated that a portion of the medulla oblongata of a rabid dog, when injected into the body of a healthy animal, produced symptoms of rabies. By further work on the dried tissues of infected animals and the effect of time and temperature on these tissues, he was able to obtain a weakened form of the virus that could be used for inoculation. Having detected the rabies virus by its effects on the nervous system and attenuated its virulence, he applied his procedure to man; on 6 July 1885, he saved the life of a nine-year-old boy, Joseph Meister, who had been bitten by a rabid dog. The experiment was an outstanding success, opening the road to protection from a terrible disease. 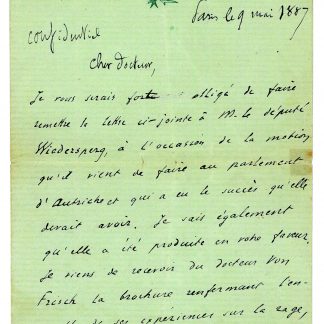