One of the earliest Western documents of Arabic epigraphy

First edition of this rare history of Sicily, compiled at the command of Paolo Giovio by the Sicilian-born Dominican friar Tommaso Fazello (1490-1570). Includes a double-page woodcut plate of an old inscription found on the walls of the Porta de' Patitelli, the so-called Torre Baych: it was formerly thought to be a Chaldaic inscription stating that the tower was built by a grandson of Esau. The tower has been since been demolished, but the inscription preserved, and subsequent scholarship identified the text as Quran verses dating from the fourth century after the Hijra.

With this work, the Dominican friar Tommaso Fazello (1498-1570) single-handedly created modern Sicilian historiography. He also rediscovered the ruins of the ancient Sicilian towns of Akrai (Palazzolo Acreide), Selinus (Selinunte), and Heraclea Minoa, as well as the Temple of Olympian Zeus at Akragas (Agrigento). The island was conquered by the Arabs in the 9th century and remained under Muslim suzerainity for two and a half centuries. The Arabs introduced new methods of irrigation, thereby significantly boosting agricultural development. Under their rule, Palermo rose to the rank of Sicily's foremost city. Sicilian towns were variously raided by Arab troops between 835 and 884. In the mid-11th century, the Muslim population made up more than two thirds of inhabitants, with Arabs concentrating around Palermo on the north coast and Berbers around Agrigento in the south.

Quires A and B transposed. Variously browned and brownstained throughout; occasional insignificant worming near gutter. A good copy of a rare work. 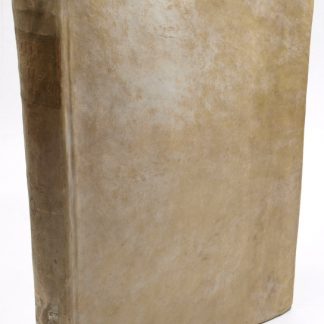