First edition of this account of a Middle Eastern civil servant's visit to Britain in 1765, translated from the original Persian manuscript by James Edward Alexander. Born in India, Itesa Modeen learned Persian and entered the service of the British. When Shah Alam wanted to send letters and gifts to King George III in England it was decided that these would be taken by a British army officer, accompanied by Modeen as his translator and secretary. Modeen wrote a record of his journey recording the sights he saw and the excited reactions of Londoners to the unusual sight of a high class "Hindoostanee" (as he called himself) visitor. It was not until some 60 years later that his manuscript account was translated and published. The Mirza spent about almost three years on his trip to Europe, staying mostly in London but also visiting Scotland and Oxford, before returning to his native India.

Insignificant foxing to title and final leaf. From the library of Sir Richard Strachey (1817-1908), the Indian administrator and father of Lytton Strachey (his engr. armorial bookplate to pastedown); later in the collection of Christopher Jower (bookplate to flyleaf). 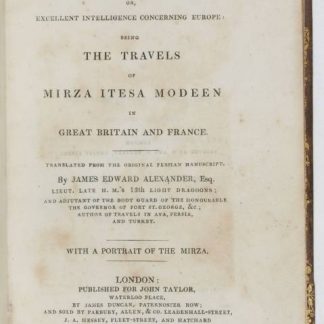