First edition of this early translation by Edward Forster (1769-1828), based on the French version of Antoine Galland, which had first appeared between 1704 and 1717. "Galland's translation [...] was quickly translated into English and German. It enjoyed a most remarkable success throughout Europe, perceptible even in children's literature, and contributed significantly to the new image which enlightened Europeans entertained of the Islamic East: after Galland, this was no longer the home of the Antichrist and of accursed heresy, but rather the ever-constant Orient beneath an eternally fair sky, boasting splendid colours and unheard-of wealth, Caliphs, Viziers, and Kadis, harems, fairy-tale princes, fairies and genies, sorcerers and sages, a world of fantastic adventure and outrageous incidents" (cf. Fück, p. 101).

After having studied law and medicine at Balliol and St Mary Hall, Oxford, Forster decided to enter the clergy. He soon "entered into an engagement with a bookseller, William Miller [...], to issue tastefully printed editions of the works of standard authors, illustrated by the best artists of the day" (DNB). The series was inceived with "Don Quixote" in 1801. His "Arabian Nights" were frequently reprinted, seeing five editions by 1854. The present set is distinguished by the beautiful illustrations after Smirke, "whom every person of correct taste will acknowledge to be second to none in this range of art" (I, vii), as well as by the elegantly gilt navy blue morocco bindings. Some occasional spotting due to paper, some slight wear and scuffing, but a beautiful set altogether. 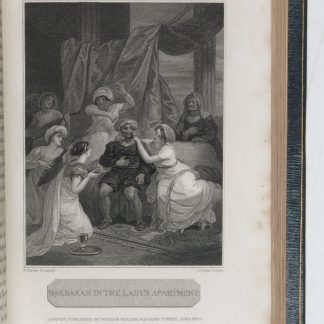