A remarkable sammelband of three rare architectural and garden ornament works (the first in two parts), all of which were published by the important Augsburg print publisher Johann Andreas Pfeffel. I: First and only edition of a very scarce ornamental garden pattern book by the newly appointed court gardener and inspector of the Salzburg gardens, Franz Anton Danreiter (1695-1760). In 1728 Danreiter was appointed court gardener and inspector to related buildings by the ducal bishop of Salzburg. He translated Dezallier's "La Theorie et la Pratique du Jardinage" into German and became one of the more important mediators of French garden design to the German-speaking countries. His own designs issued in the present work, in two parts, with the second part particularly rare, show more than 100 ornamental and fanciful planting patterns on 42 plates. This was his first and rarest model book with garden plans for parterres. They show that far from endlessly repeating the strict symmetrical canon of French Baroque garden design, Danreiter developed a never-ending variety in ornamental designs which herald the German rococo. Danreiter served five successive bishops in Salzburg. Between 1727 and 1735 he also engraved a number of large-scale views of the city which represent a unique documentation of Salzburg in its 18th century baroque glory.

II: First edition of Steingruber's first published architectural book, showing designs for town houses and palaces. In total Steingruber shows seven scaled designs from a garden pavilion in an aristocratic park (2), several ever more lavish town houses for the haute bourgeois (4), and finally a ducal residence (1). Each design is shown in as much detail as possible with elevations and plans, but also several sections. The grander houses are shown with views of street and garden elevations; some designs have differently laid out plans. The architect J. D. Steingruber (1702-87) was appointed court architect by the Margrave of Brandenburg-Ansbach in 1734. In the course of his near sixty-year tenure of this position he was able to transform the townscape of Ansbach after his own designs. He is best remembered for his playful "Architektonisches Alphabet" (1773), a remarkable series of designs in which each building has a ground plan based on a different letter in the alphabet.

Very rare: the only three complete copies of Danhauser's work located in libraries worldwide are at Augsburg (cf. KVK), Dumbarton Oaks (cf. OCLC), and the National Gallery, Washington (cf. Millard, Northern, no. 18). The Bavarian State Library and the British Library have only the first part; Olschki, Choix, 645 offered a copy with the second part, but lacked 2 plates in that part. 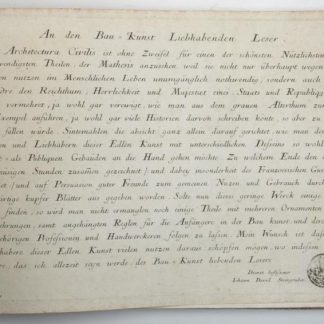