The fullest account of Ottoman affairs during the 17th century

Rycaut, Paul. The Present State of the Ottoman Empire. Containing the maxims of the Turkish politie, the most material points of the Mahometan religion [...].

Second printed edition of Sir Paul Rycaut‘s famous Turkish chronicle (the first available), drawn from various authentic sources and from the author‘s own observations. "His most important work [...] presents an animated and, on the whole, faithful picture of Turkish manners" (DNB). "Provides an account of the society and political system of the Ottoman Empire with unprecedented thoroughness" (cf. Osterhammel, Die Entzauberung Asiens, 32). "An extremely important and influential work, which provides the fullest account of Ottoman affairs during the 17th century" (Blackmer). The 1666 first edition, which this replaces, was almost entirely destroyed by the Great Fire of London. The attractive engravings depict dignitaries and persons of various ranks in their costumes, also including the illustration of a turban. The loss of the frontispiece is to some degree extenuated by the fact that it merely showed a repeat of the engraving on fol. B2v (Sultan Mehmed IV on his throne).

Corners bumped. Some foxing, but still a good, prettily bound copy. Provenance: bookplate of Stefanos Karatheodoris, a Greek Phanariote diplomat in Ottoman service and father of the mathematician Constantin Carathéodory. 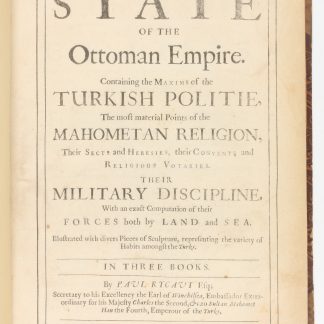 Sie sehen: Rycaut, Paul. The Present State of the Ottoman Empire. Containing the maxims of the Turkish …London, 1668. € 2.000,00
In den Warenkorb