To Dr. Frederick Salmon, complaining of some aches and pains. Dickens and his wife went to stay at the White Hart Hotel in Windsor on November 6th, the day after Dickens completed his novel "Barnaby Rudge". The trip was meant to provide some rest and relaxation for Dickens who had completed "The Old Curiosity Shop" and "Barnaby Rudge" back to back, and had recently undergone major surgery. Dr. Frederick Salmon had performed surgery on Dickens in October of 1841 for a fistula of the rectum, a procedure for which Salmon was renowned. In this letter, Dickens' describes his pain and references the operation with his typical wit, noting "all manner of queer pains were floating about my illustrious person [...] now (but not often) shooting through that region which you have made as tender as my heart [...]". Dickens tells his doctor that he is feeling "immeasurably better" and asks whether Salmon would like to make his follow up visit tomorrow rather than Tuesday.

Light soiling to creases; evidence of removal of wax seal. 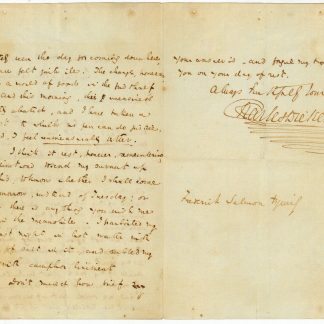