[Slave Trade]. [Slave Trade.] Class B. - East Coast of Africa. Correspondence respecting the Slave Trade and other matters. From January 1 to December 31, 1872. Presented to both Houses of Parliament by command of Her Majesty. 1873. [C.-867-I].

Rare British parliamentary papers and correspondence with local agents and officers on the slave trade, especially in Madagascar and off the south coast of Arabia. One item discusses the reported landing in Arabia of slaves from a French dhow, noting that "few French dhows go to Arabia without a few slaves who are sold" (p. 69). Comprises the sections "Zanzibar" (pp. 1-43); "Reports from Naval Officers - East Coast of Africa Station" (pp. 45-59); and "Appendix [Zanzibar]" (pp. 61-69). 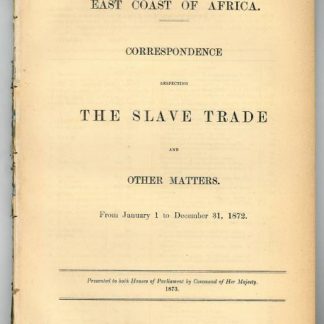