First edition of a work on poisons, compiled by Sante Arduino (or Ardoini) of Pesaro. "[T]he elaborate compendium on poisons in eight books which Sante Ardoini of Pesaro compiled in the years, 1424-1426, from Greek, Arabic and Latin works on medicine and nature, and which was printed at Venice in 1492, and at Basel in 1518 and 1562 [...] Although Ardoini quotes previous authors at great length, his work is no mere compilation, since he does not hesitate to disagree with such medical authorities of Peter of Abano and Gentile da Foligno, and refers to his own medical experience or observation of nature at Venice and to what fisherman or collectors of herbs have told him. He also seems to have known Arabic, and his occasional practice of giving the names of herbs in several Italian dialects is of some linguistic value" (Thorndike). Arduino makes extensive use of the works by Avicenna (Ibn Sina), who "held a high place in Western European medical studies, ranking together with Hippocrates and Galen as an acknowledged authority" (Weisser). Among the numerous other sources he used are Galen, Avenzoar (Ibn Zuhr), Rasis (al-Razi), Andromachus, Albucasis (Al-Zahrawi), Serapion the Younger and Dioscorides.

A very good copy, with only a few marginal waterstains. Binding slightly rubbed along the extremities and with a few scratches on boards. 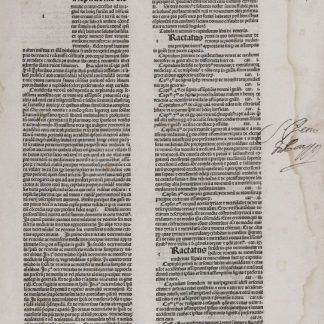