To Anna Isabella Noel-Byron, "Lady Byron", the poet's wife: "Would the page of whom you were speaking last night, go to Lady Monson for a month or six weeks? - she only wants him while she is in London, & as it is of importance to her to have a boy of good character - & not easy to find one for so short an engagement she would be likely to overlook some outward deficiencies - moreover she is an excellent person & kind to all around her - particularly to her servants. Would you send the boy to 49 Park Street between 11 & 12 on Friday - if the situation suits him? I am sailing in extremest haste - & can only add my earnest hope that you are not the worse for yesterday [...]".

Jameson was a friend of Ottilile von Goethe, the poet's daughter-in-law. Her friendship with Annabella Byron dates from about 1845 and lasted for some seven years; it was brought to an end apparently through Lady Byron's unreasonable temper. The marriage between Lord and Lady Byron had lasted but a year, as Byron himself was given to fits of anger and maintained an incestuous relationship with his older half-sister Augusta Leigh. The couple separated in March 1816. Their only child, Augusta Ada Byron (Countess of Lovelace), was a gifted mathematician and is credited with creating the first algorithm intended to be carried out by a machine - in fact, the first computer program. 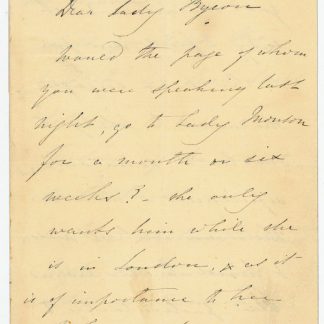