Stunning double-tinted views of the Middle East, after drawings made in 1838 and 1839, with 250 plates

Second edition, with reduced illustrations but with more of them double-tinted or chromolithographed, of one of the most splendid and historically important visual records of the Middle East, after drawings by David Roberts (1796-1864) from the sketches he made from life during his travels through what is now Egypt, Israel, Jordan, Saudi Arabia, Syria and Lebanon in 1838 and 1839. In Egypt he ventured up the Nile as far as the Nubian temples at Abu Simbel, near the present border with Sudan and travelled by camel through the Sinai to the extraordinary carved-rock buildings of Petra. These had been unknown to Europeans until Burckhardt discovered them in 1812 and 1813, so Roberts's views are among the earliest and are in many ways better than the few predecessors. In Lebanon he ventured as far as Baalbek, which had seen few European visitors before Egypt annexed it in 1832. Other sites he visited and drew include Cairo, Suez, Gaza, Jerusalem and Beirut. He was one of the first Europeans allowed to make drawings of the interior of mosques, so even in well-known cities these too opened a new world to European eyes. His views also provide a very detailed visual record of many sites that were afterward destroyed or disturbed. He drew them during the infancy of photography, before it reached the Middle East and long before it reached maturity there. His views of the modern cities also preserve records of both their architecture and their daily life and he shows spectacular landscapes in the mountains, around the Dead Sea and along the Nile and the Jordan. Roberts, born to a poor (Welsh?) family in Edinburgh, was apprenticed as a house painter, moved to London and worked his way up to paint sets for the Drury Lane Theatre and others. Thanks to patrons who appreciated his talents and hard work he was able to make the expensive and dangerous voyage through the Middle East. George Croly (in volumes 1-3) and William Brockedon (in volumes 4-6) provided explanatory and historical notes on the sites shown in Roberts's views.

Roberts's views were originally published in two separate works, issued in parts in the years 1842 to 1849 and often found together. One centred on the Holy Land, though also including views in other parts of the Middle East, while the other was devoted to Egypt and Nubia. The views in the former were made with only a single tint block and even the latter used fewer tint blocks than the present second edition and only one chromolithograph. The present edition, with sometimes very intricate double tints and two chromolithographs (with black and three tint blocks) is a masterpiece of tinted lithography. Since the lithographers used photographic reductions of the lithographic views of the first edition as an aid to their work, the book also pioneered the use of photography in graphic reproduction. The lithographed title-pages are dated 1855 except for those of vol. 3 (from the simultaneous New York issue, undated) and 6 (1856) but volumes 2-6 include plates dated 1856. The dates of the plates in all six volumes range from 16 April 1855 to 15 December 1856.

The title-page of volume 3 was intended for the simultaneous New York issue, but appears to have always been part of the present copy. In very good condition, with occasional light foxing, mostly on the backs of the plates, and with a faint marginal water stain in the lower outside corner of many plates in volumes 3 and 4, not approaching the printed image. The inside front hinge of the second volume as bound has separated from the book block and the bindings show some wear at the hinges and extremities, but they are otherwise also very good. 250 mostly tinted and double-tinted lithographs providing stunning early views of the Middle East, including Petra, Abu Simbel and the interiors of several mosques. 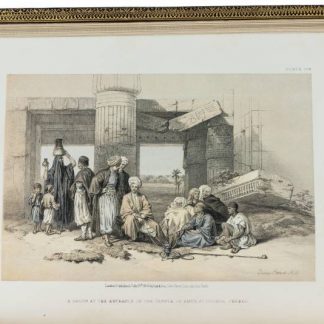