First edition of "the most influential description of China to appear during the first half of the 17th century" (Hanotiau). Ricci (1552-1610), an Italian Jesuit missionary, arrived in China in 1582. Adopting Chinese dress and learning the language, he succeeded where other missionaries had failed. He served in Nanchang, Nanking, and received permission to establish a missionary post in Beijing in 1610. During these years, he kept a journal which presented the history of Jesuit mission in China from its beginning in 1582 to 1610, the year of his death. This manuscript was translated from the Italian into Latin by Ricci's successor Trigault (1577-1628), who tried to elicit support for the mission in China. Trigault, however, changed many passages of Ricci's journal and augmented it with information based on several Portuguese reports. "The resulting volume contains not only a history of the Jesuit mission but also includes a wealth of information about China in the chapters describing Chinese geography, people, laws, government, religion, learning, commerce and the like" (Hanotiau).

The title-page, engraved by Wolfgang Kilian, gives the title on a cloth hanging in a portico, flanked by the figures of St Francis Xavier and Matteo Ricci, and with a small map of China, Korea, Japan and Formosa, with the Great Wall depicted, at the foot.

With library and de-accession stamps. Engraved title-page trimmed down and mounted on browned leaf; some thumbing on the few first and last pages and some minor foxing thoughout, not affecting the text, otherwise in very good condition. The Perrette copy sold at Christie's New York in April 2016 commanded US$68,750 (lot 183). 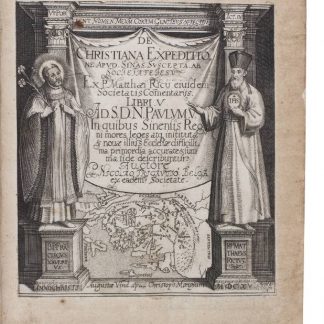