To Walter Creighton: "We were afraid it was something of that kind, as we haven't seen anything of your activities for so long. It's good to know that you are better [...]".

Walter Creighton (1878-1958) was a son of Mandell Creighton, Bishop of London, and Louise Creighton, "who was one of Robert von Glehn's daughters. He gave up training to be a doctor to train as a singer; he gave the first performance of Vaughan Williams's Songs of Travel in 1904 and also had a minor career as an actor. After various personal crises, he served with distinction in the First World War, and was awarded the Military Cross. He developed into an excellent organiser, and in 1924 organised the Pageant of Empire at Wembley Stadium; in 1934, he devised and organised the Pageant of Parliament at the Royal Albert Hall. In after years, he moved to Antibes" (Valerie Langfield: Roger Quilter. His Life and Music [Woodbridge 2002], p. 287). 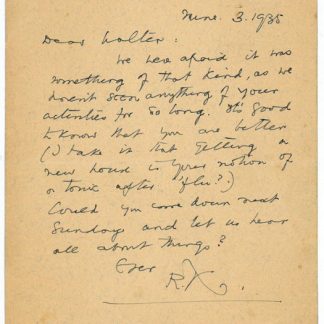