Journal of an expedition by a pioneering Egyptologist, illustrating hundreds of hieroglyphs

At the age of 27, Louis de Vaucelles undertook an expedition to Egypt to explore the banks of the Nile from Cairo to Aswan. He set out from Marseille on 27 January 1826 and reached the second cataract on 27 May. In his journal he accurately reproduces all cartouches and inscriptions of the temples, tombs and palaces visited up to the first cataract south of Aswan. He gives the condition of monuments (sometimes mere ruins), identifies traces of Christian chapels and churches, translates hieroglyphs dedicated both to pharaohs and Roman emperors, indicates (in cursive script) several Arabic words and names, and mentions the orientalists who preceded him: his mentor Champollion as well as Denon, Maillé, Belzoni, and Niebuhr. Among the temples and sites he describes are Ipsamboul, Edfu, Dakka ("un des mieux conservés"), Thèbes ("Louqsor"), Karnak, Denderah Assouan, Elephantine and Philae as well as the pyramids of Giza, Cleopatra's Needle, the Sphinx (the head of which is said to be "extrêmement mutilée"), Alexandria, and the Nile Delta.

The final fifty-odd pages are devoted to contemporary Egyptian cities, their people, and their Arab, Jewish and Coptic traditions. As Vaucelle notes, Coptic Christians are free to practice their religion due to the unrivalled tolerance of the Muslim faith ("tant il est vrai qu’il n’y a pas de religion plus tolérante que la religion mahométane"). He also provides details of medical operations such as castration, circumcision, and excision, as well as of the "Kalisch" festivities held in Cairo at the time of the opening of the dikes.

Louis de Vaucelles de Ravigny was trained by Jean-François Champollion, who in 1824 published his "Précis du système hiéroglyphique des anciens Égyptiens". Apart from the present travel journal he also produced a "Chronologie des monuments antiques de la Nubie" (1829), based on the interpretation of the royal legends contained in the hieroglyphic reliefs, a book in which he pays tribute to the German egyptologist François-Christian Gau. 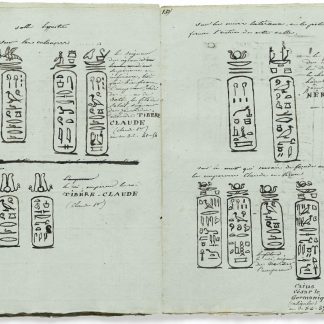