To Madame Irma Antonetti of the Italian Cultural Association (Associazione Culturale Italiana) in Turin, thanking her for her letter and the specifications that are useful to him. Barthes tells her that he thinks they will be able to complete the programme by writing to each other in the end of February. In general and as far as possible, he prefers taking the train rather than the plane: "Si le dimanche 1er Avril est libre, peut-être essaierai-je de le passer à Venise" ("If Sunday 1st of April is free, I will perhaps try to spend it in Venice").

Barthes ends his letter by asking Madame Antonetti whether it is his task to take care of the tickets Paris-Turin and Bari-Paris, by thanking her once more for all this and by sending his respectful greetings to her.

On headed paper; with punched holes (not touching text). 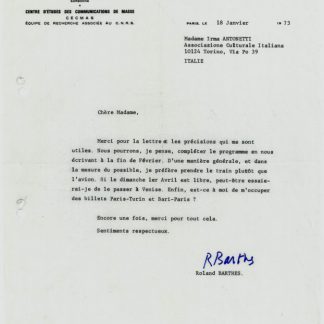